What's next for Alexander?

The Zom Wars Trilogy is late in coming, I know. However it's only been delayed by the production of the full length feature film "Lone Pup" that should be wrapping up by the end of 2020. My work in the film should be complete by this summer, and Alexander the Avenger is next on my list! 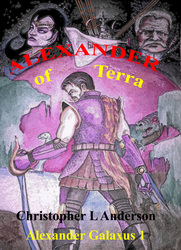 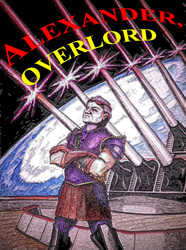 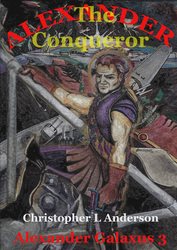 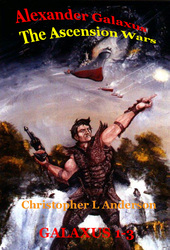 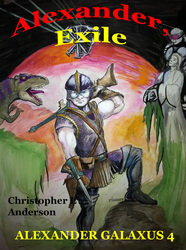 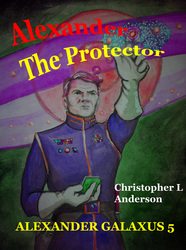 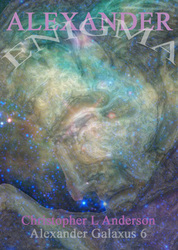 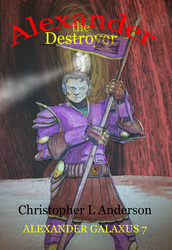 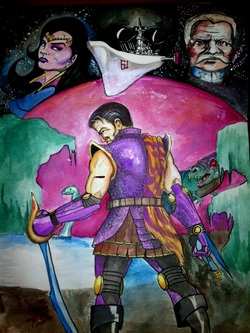 Reviews:
Alexander Galaxus is a pretty good series. Alexander of Terra is an *outstanding* novel.
What we have here is something out of the ordinary. Eschewing contemporary literary convention, Anderson has thrown us back in time almost a hundred years to the Golden Age of science fiction. Tarzan, John Carter of Mars, Buck Rogers, Flash Gordon, Doc Savage! In them you will see the seeds of Alexander Thorson, later known to the galaxy as Alexander of Terra.
In an unusual twist, humanity has been observed for tens of thousands of years -by a galaxy terrified of us. We are the largest, strongest, most innovative, and by far the most violent race in the known universe. The galactics pay appropriate attention, lest we burst onto the scene. Our legends have become their legends, foremost among them being the cult of Alexander the Great. Mind bending at first -but later a powerful observation on the power of perception over reality- the galaxy has created a universal phobia of humanity as conquerors, yearning to imitate Alexander's conquests on a galactic scale. When mischance lands a human in the clutches of the (second) most puissant warrior race in the galaxy, he finds himself fighting against misconceptions universally held for thousands of years. Prison worlds filled with dinosaurs, Wet-Navy Battleships resurrected as space fortresses, beautiful aliens, galaxy spanning romances, prickly honor and politics fit to drive races to genocide ensue.
It is onto this fascinating and original setting that the author drops The Great Man. Like authors of Sci-Fi's Golden Age, the author decided that representative "realism" be damned, Heroes should be Heroic: tall, strong, intelligent, educated, capable combatants -and attractive to women, whether or not they happen to be human! And the hell of it is, it works. Cliche or corny or retro or whatever you want to call it, this kind of storytelling has been so long out of fashion that it's fresh again, and surprisingly entertaining.
Buy this book. I cannot see how you could be disappointed. (Seriously! Dinosaurs!)  David R. Glier 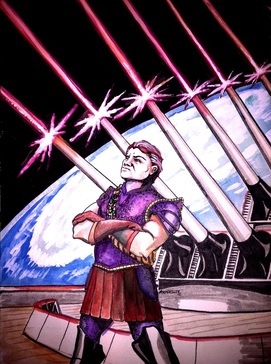 Excellent second book of the series. Definitely read the first book prior to picking this up. They flow very nicely together. While the main plot line is easily followed there are some unexpected twists, very believable. It's nice to read a book where the hero leads but makes some mistakes. It gives realism to the story that capable non-primary characters can think for themselves and solve issues that the hero has missed. Read this in one sitting and can't wait for the next book. Alexander is a true leader.
JP Patton

I must admit, I picked this up on a whim and I was glad I did. This is a great military science fiction series. Anyone who likes John Ringo, David Drake and that type should pick this series up you will not be sorry. Andrew C. Johnson 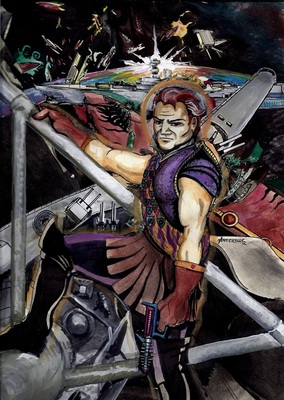 Let me tell right away that my frustration is NOT with the trilogy.
In fact I loved it!
At times I was pacing with Kindle in on hand, reading, chewing the nails of my other hand, even though for my taste it was a little heavy on military tactical description, I couldn't put it down until the end; after which I immediately set upon finding out if and when can I get a next installment in the series.
Well, there was no info about it on the author's website "dragons-and-dreadnoughts.com". I thought I've got lucky with "wordpress.com", where I found in highlight Alexander, Protector due the end of August. Today is the 16th and I can't find it on Amazon to pre-order.
I'm afraid that the publication info is incorrect. THIS is what frustrates me!...
...and this is the proof of the entertainment value of the series!
Normally I am not a commentator or reviewer, but I want the next book, badly!
My advice: Buy it, you wont regret it!   Abanash
KINDLE                       PAPERBACK 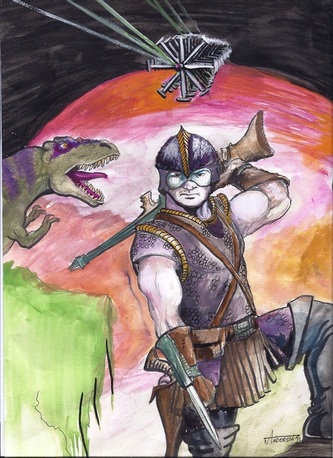 A great escape into a new world. Exactly what fiction should be! Heroes,
This series continues to improve. Please read the first Alexander Trilogy before this book. You will enjoy the characters and story as they both develop. I was unable to put down the last two books. The new world created for the story line draws from our development as a species; our conflicts and how we SHOULD be dealing with them.
Alexander is an example of what we should be striving to become. Honor, chivalry, and strong faith are alive and well within the Overlord and his cohorts. Stand up and be counted. If you have never experienced a man worth befriending, search for your Alexander.
The author is refreshing in his combination of military, history and the strong ideals of the conflict between leeches and the Champions we need who fight them. We have someone willing to speak to those of us who agree that the world is just too PC.
My only regret with this series: waiting for the next book.  JP Patton

After reading the trilogy, several times, I was sadden to think that there would be no more Alexander in my life. But then I ran across the exile sequel, downloaded it and read it the same day. As with the trilogy I couldn't put it down the excitement and action goes from the first to the last page. Exile answers some questions I had from the previous books; i.e. Nazeera's child with Bureel. I truly enjoyed this book and anxiously look forward to the next Alexander saga.  AB Nimmers 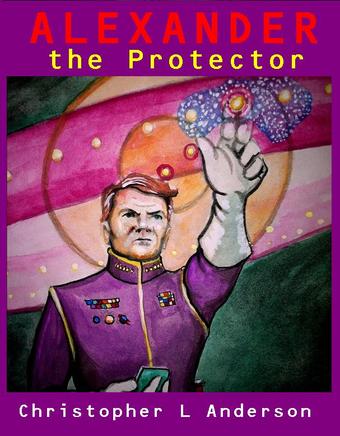 Since I first read the Ascension Wars trilogy, I have been addicted to reading your books.

This has been one of the most original ideas I have come across in a long time when it comes to the space opera genre. It does follow the same formula that you see, strong lead character overcoming insurmountable odds to lead the good guys to victory. Where this series excels is in the back story, that is why I eager devoured Space Cadet and the Space Ranger books.

Having mentioned that I would like to say that those books are rife with spoilers for this series, so if you really follow this series I suggest reading those books as well.  Paul Charleston 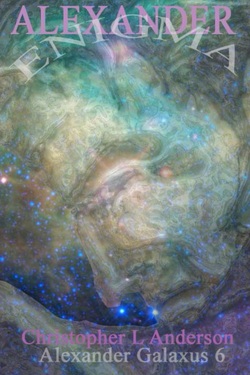 ALEXANDER GALAXUS 6: Alexander, Enigma
Another instalment in what I have found to be a great entertaining story. Good development of the strategies, and the 'luck' needed sometimes for things to work out. But I do want to see Alexander conclude on a successful note. Such is the time involved with Alexander through the series that it would be a bit of a downer if his victory proves a hollow one at the personal level. Rovert

The Alexander Galaxus series is great. I just wish I could find all the books, listed in order on Amazon. That is one thing Amazon's book service could do. . . .When an author has multiple books in a series, list all of them so readers can get them an read them in order. While the book stands on its own and is certainly well written, enough hints to what happened before are dropped to make me want to get the other books in the series. So far, I have only read a few and they were all great. I am eagerly awaiting the next book to see what happens! Kenneth Kania 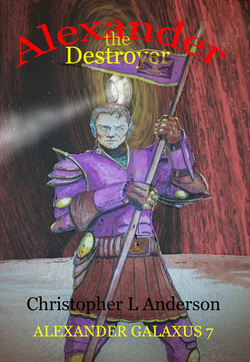 ALEXANDER GALAXUS 7: Alexander the Destroyer
This saga is amazing. I love how you have created a world to explore with these books. I can't wait for the next Space Ranger and Space Cadet. Don't ever kill off the Overlord, please....  Paul Charleston

This book brings an end to the Methuselan story arc of the Alexander Galaxus series of books. It has mostly been an enjoyable reading and this book is no exception to that.  Alexander’s adventures continues with the same “bravado” as we have been used to in the previous books which I would say is what makes these books separate themselves from the crowd. It will be interesting to see what new adventures that Christopher L Anderson dreams up for Alexander. Given the title of the next book that is presented at the end of this one it will involve an old “friend”. Dark Jedi