Every novel is made up of scenes in the story that make it come to life. Here are some of the ones that for me simply clicked. These are the scenes that I go back and read myself because I either like the imagery they create, the feel of the action, emotion, humor or the play on words. I hope you enjoy them as well. Simply click on the image to read.

Talk about it on the blog!

The 'Catacombs' Scene from TO KILL IS NOT ENOUGH: Crusader . . . 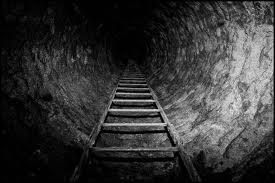 This scene comes from the first thriller of the Flint Wolfe series. I love Paris. I've generally found the Parisians to be very friendly people and the city to be filled with a palpable sense of history-it just oozes out of the pores of the stone.  Napoleon is right around the next corner; the Dark Ages are a short descent underground. That's where this scene is set. Everyone should take a tour of the catacombs if only to feel the age of the city and Western culture. In this scene, Flint Wolfe is on the trail of Marwan Hamdi, one of Al-Qaeda's operational commanders. He finds more than he bargained for under the streets of Paris on this night! I enjoyed the pace of the scene, the different types of action, and of course the opportunity for jabs of ever present Flint Wolfe sarcasm . . .

The 'Freya Wedding Crasher' Scene from PRAETORIAN!: The Last Praetorian . . . 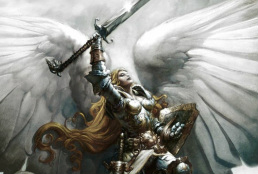 The interplay between the indomitable but tragic figure of Tarion, the last Praetorian, and the Norse Goddess Freya is one of my favorite subjects in the TWAIN series. Tarion is desperately in love with Freya but he'd rather not be. The love of a mortal man for an immortal Goddess is doomed to begin with, Tarion knows that. Freya on the other hand depends on Tarion's devotion-it feeds her vanity, but more importantly it grounds her, keeping her attached to the world of Midgard. She'd be miserable without him. The scene is set after the end of the Dragonheart curse, a period of a thousand years where every day repeated itself as the world waited for the coming of the Wanderer. The Empress Minerva, a sixteen year old monarch with the experience of an age, has decided that now is the time to wed her general Tarion the Praetorian-alas Freya is not happy with the plans for the wedding and she makes her displeasure known in no uncertain terms! 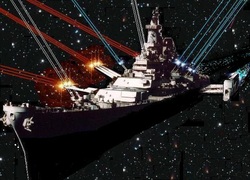 If this is your first time on my site you'll have noticed the constant image of battleships flying through space-unbelievable? That's one of the great challenges for a science fiction writer; that is, making the unbelievable not only believable but commonplace. The Alexander Galaxus series is what I call my kitchen sink series because I threw everything I could think of into it no matter how crazy or against convention it sounded, flying battleships, dinosaurs, aliens afraid of humans, and a broken down, frustrated man who rises from obscurity to become Alexander Galaxus. This scene introduces the intimidating Terran battleship to the Galactics. I thoroughly enjoyed writing it.

The 'Fortress Enterprise' Scene from TO KILL IS NOT ENOUGH: The Mahdi 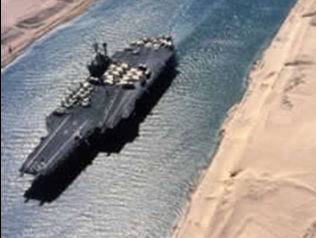 'Big Jake' Garner returns as the head of the Enterprise SEAL team and not a moment too soon! The neophyte Caliphate sees the Enterprise as the perfect vehicle for announcing to the world: "We have arrived!" Trapped in the Suez Canal, surrounded by thousands of jihadists desperately wanting the Big E for a trophy, the Caliphate strives for legitimacy. The Enterprise, symbol of the Western World, fights for survival and honor. This scene is all action, blood and guts. It was an adrenaline rush to write!

The 'Duel in the Sky' Scene from ZIRCUS: Foncke for Forty 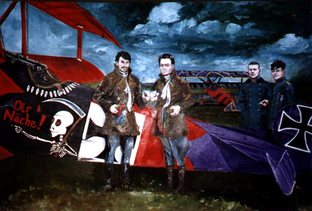 Every young boy has fantasized about flying in World War I either against or for the famed Red Baron-yes, he really existed-and my brother and I were no exceptions. In the painting you see our triplanes as we would have painted them with the Red Baron himself looking on. It only seemed natural to write a series of short stories based on a pair of brothers fighting in Manfred Von Richtofen's actual Flying Circus; so named because they travelled across the front wherever the fighting was fiercest in their brightly colored fighters. Although the antagonist Rene Foncke never met Richtofen or the Brechlin Brothers in battle he was just as real, just as arrogant and just as willing to steal other flyer's kills as I portray him. It makes for a great adventure story with interesting characters; I also got to write a story with my brother as the hero-that was cool!

The 'Tyrannosaur Family Romps with Alexander' Scene from Alexander, Exile 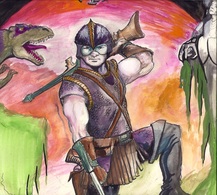 Alexander is in exile. What better way to spice up a day on the infamous prison planet of Pantrixnia than by taking an outing and being pursued by the friendly neighborhood Tyrannosaurus clan? I always love dealing with dinosaurs, especially Alexander's adopted family. This is the family of Ralph, son of Attila. Alexander named the breeding pair Ralph and Alice after the Honeymooners. They have three kids; a pair of girls and a boy. Alice and her girls are always after Alexander; for some reason they just never meshed. Ralph is indifferent, but he'll do what Alice wants. Tyrannosaurus families are no different than human families; a happy wife means a happy husband, and right now Alice wants Alexander as an appetizer. 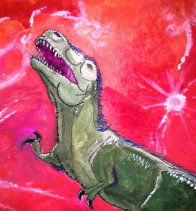 Lone Pup is a Tyrannosaurus pup from my daughter's imagination. She was tired of the cliche Disney herbivore heroes; real dinosaurs were carnivores! Lone Pup is growing up in a perilous world under very demanding parents; he's the only child of their destroyed nest. That doesn't make his dad Strong Jaw any easier on him. Dad expects a lot from his son. Lone Pup's first test is the annual trek north to rejoin the clan for the great hunt. On the way they run into a band of surly Spike Frills-Leaf Eaters-food! Lone Pup is too small to join in the hunt but that doesn't stop him from getting into trouble!

The 'Night Elf King's Accounting' Scene from The Primordial Flame 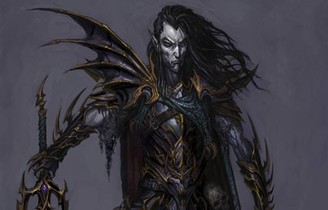 The Young Adult fantasy The Primordial Flame has a lot of nuggets in it but one of my favorites is when our   young apprentice wizard Alexander and his sister the druid priestess McKenna have to face an accounting with the dreaded King of the Night Elves. Their courage, wits and surprisingly enough their honesty is put to the test in a scene that ends in a very unexpected way. One of my favorite parts of writing is to flesh out the antagonists, in this case the Night Elf King. Although his ways aren't our ways he does have a reason for things; he's not a nice guy by any stretch of the imagination but he's not evil like say a demon, the Devil or a Dallas Cowboy fan either!